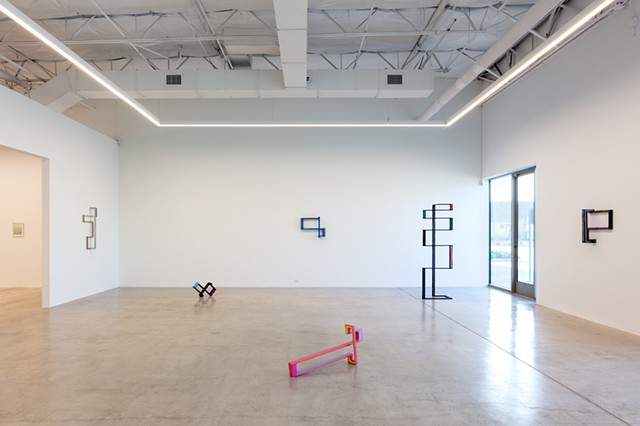 what happens when the bodyself speaks? what is the shape of this sound? is it a score to be followed, to be improvised? or a skeleton that creates the patterns of thought? or a vessel that is filled through articulation?

movement outward, around and through, a vocalization. to produce (speech sounds, speechlike sounds)

to give voice to (utter) (loss, amazement, silence)

a state of utter

is voice is shape is color, shape as color, as movement, as volume. to utter, to bring forth. vertical becomes horizontal. to utter is to go toward other

to spell into existence a reality of us and others

a pronouncement. to say it is so. to move breath from inside, upside, downside, to carry out. to carry voice, which is air, which is thought, which is color, which is texture, which carries through the bodyself, to exist outside the bodyself

12.26 is pleased to present Molly Larkey: Utterance. Consisting of materials including stucco, house paint and welded steel, Larkey’s multifaceted shapes are meditations on the sounds that escape between held breaths; poetry written in the language of geometric forms and tactile colors; suggestions of generosity within discrete edges; swaths of color that come in and out of perception; lines that twist and change, by turns strident and quiet.